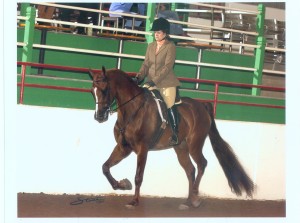 Mayfest was a blast.  As I mentioned in my earlier blog, it has been 6 years since I had shown at this particular show.  I had forgotten how fierce the competition can be.  However, that’s a good thing, it challenged Chance and I to push ourselves to the next level.

Afer all, Chance and I had done well at previous horseshows including another really competitive one which is the Cowtown Show in Fort Worth.

We did well, all things considering, it was our first show with our new trainer, Jennifer of Goslin-Nix.  It was her first time to work with Chance at a horseshow, and she was satisfied with what she saw with Chance and I.  Yes, we have several areas of improvement, most noticeable to slow down in the reverse direction and to have a really consistent “hunter” head set.

Yes, I made some mistakes; however, I had one just about perfect ride, in the Championship class on Sunday morning.  I will be honest, I was disappointed I did not receive a ribbon.  However, as it’s been known in the horseshow circle, sometimes, you win a ribbon in a class that you personally did not think was up to your expectations, and other times you can have a perfect class and not get a ribbon.  It all evens out in the big picture of things.  Most of the times, the placings fall where they are supposed to.

On the other hand, it is not always about the placings, it is your personal goals for the horse show and the class that is taking place that matters the most.

Therefore, I was very happy with my class that Sunday morning during the championship, because I proved to myself and Chance that we can overcome our past errors in earlier classes at the show.

As for the show itself, it is really competitive, all the big boys and girls come out to play, because this show is shown in the same facility where we have our Region 9 show a few short weeks later.

Also, it is pretty much the last show of the season for us Texans, with the exception of  Spindletop, San Antonio Fiesta and Regionals.  We, Texans do not show in the summer, it is way too hot.  Our show season begans in the fall, with it peaking during the spring months.

Yes, some people show in the summer, but they go way, way, out of state like Missouri, for instance.

Thus, this also is a great show for trainers and riders to fine tune their horses for US Nationals which happen in Tulsa in October.  It gives the trainers and riders a chance to see “how they stack up against the competition.”  Therefore, enabling them to have all summer to finesse the horse and rider teams.

Finally, the classes were quite large which is awesome, lots of competion with  tremendous “quality” in the hunter classes.

I am glad I went, I had a blast and I am ready to rise to the challenge with Chance, Jennifer, and Mrs. Nix.

We are looking forward to our next show at the Spindletop Show in Houston in Late May and finally, the Region 9 show in June.  I have never shown Chance at Region 9, so that will be a goal accomplished.  Whoo hoo!

I will write more about the upcoming shows, later.  Until next time, Happy Riding, see ya at the shows, and as always, have a sunny day.

Well, it’s been just a little over a month, since I have moved Chance to Goslin-Nix Training Center.  So far, I am having a blast learning from my new trainer,  Jennifer.  Chance is also happy in his new home.

As for Chance’s training, the first couple of rides were interesting, after all he had to get used to a new trainer and his new home.  However, he settled in pretty quickly.  Jennifer and Chance settled into a nice work routine.  He is responding well and is game to learn new techniques from Jennifer.

As for me, I am having a blast, I take riding lessons several times a week, it is a wonderful experience, as I never really had regular riding lessons.  So, I am constantly learning how to improve my riding.  All trainers bring their own unique spin to training and showing horses.  I love to be challenged and stimulated, thus this works extremely well for me.

Tomorrow, I leave for the Mayfest Horse show in Fort Worth.  I can’t wait, it will be my first show with my new barn.  I also haven’t shown at Mayfest since May 2003 when Megiddo was showing in Park.  Thus, I am eager to show here again.  It has been a long time coming.  The show is held at the John Justin Arena at the Will Rogers Memorial Center in Fort Worth.

Stay tuned I will tell you how it goes.

As always, Have a Sunny Day!